This week CLINUVEL announced it is evaluating the effects of its drug afamelanotide in patients suffering from arterial ischaemic stroke (AIS) in a pilot study. Consistent with our broader program, we will be sharing relevant news from the field of stroke research here on CLINUVEL News & Facts. Many of the concepts may be new for our audience, and we will delve into them in much greater depth in the coming weeks as we progress the AIS program. We will explore the intricacies of AIS and clinical practice through current literature, our Scientific Communiqués, and via social media. 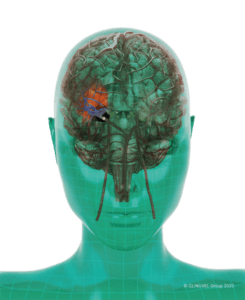 3D model of the brain and arterial system showing a clot (white), the necrotic core of the injury (black) and the penumbra (red)

There is an ever-growing body of research into strokes – how and why they occur, how they can be avoided and prevented, and how best to care for patients in emergency clinics and longer-term. A 2019 review paper from Wade Smith, MD, titled Endovascular Stroke Therapy and published in the journal Neurotherapeutics, is a useful starting point to explore these concepts.

With an annual cost of over $34 billion in the US alone, and being the second greatest cause of death worldwide, stroke poses an immense burden on society at large. Smith’s review emphasises the need for faster access to care, and alternative treatment options that improve the outcomes of the vast majority of patients who do not qualify for endovascular therapy after arriving at hospital.

For AIS, restoring cerebral blood flow rapidly, thereby salvaging the penumbra tissue and minimising the growth of the ischaemic core, is the focus of treatment. This relies on early intervention following stroke onset to restore blood flow to the brain by either chemically dissolving or physically removing the clot.

At present, over 85% of AIS patients are not eligible for the main recommended treatment aiming to dissolve and remove the clot within the brain artery, when they arrive at hospital. Eligibility and access to timely care are two major barriers to improving outcomes in ischaemic stroke, with Smith noting that over 50% of the patient group receiving therapy result in poor clinical outcomes.

One of the recommended treatments, intravenous thrombolysis (IVT in the form of recombinant tissue plasminogen activator or rt-PA), which is a clot dissolving therapy,  has to be administered within 4.5h of ischaemia before the treatment actually becomes harmful to the patient due to intracerebral haemorrhage. Traditionally, the 4.5h ‘time clock’ begins from when the patient was last reported to have been well, meaning patients who awaken with stroke symptoms rarely receive IVT. However, new research offers hope that MRI-guided techniques may allow for certain patients with an unknown time of symptom onset to benefit from IVT Thomalla et al. (2018).

If you would like to read more on the current standard of care for stroke, please head to the American Stroke Foundation webpage; or for more on the unmet patient need and global burden of the disease late a look at this article, by Philip Gorelick, MD, published in The Lancet: Neurology.

Previous articleSunscreen application technique amongst patients with a history of skin cancer
Next articlePublication brief: Comparison of Skin Photoprotection by Pigmentation and Sunscreens

A CLINUVEL Webcast on Market Position, Financial Management and Growth

A CLINUVEL Webcast on Market Position, Financial Management and Growth